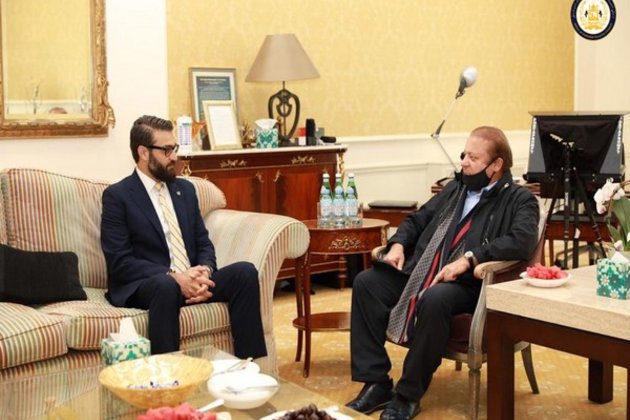 Afghanistan's National Security Council on its Twitter account shared a photograph of Mohib and Afghan State Minister for Peace Sayed Sadat Naderi meeting Sharif in London, where he has been living since 2019 for medical treatment.

Several ministers from the ruling Pakistan Tehreek-e-Insaf on Saturday criticised the PML-N supremo.

Minister for Information and Broadcasting Fawad Chaudhry said "this is why sending Nawaz Sharif abroad was dangerous because such people become a part of international plots."Nawaz's meeting with "RAW's (Indian intelligence agency -- Research and Analysis Wing) biggest ally in Afghanistan is an example of this".

"Modi, Mohib, or Amrullah Saleh (Afghan vice president) -- every enemy of Pakistan is a close friend of Nawaz Sharif," he tweeted.

Human Rights Minister Shireen Mazari questioned what the "matters of mutual interest" were.

"After Mohib referred to Pak -- not PTI govt but [our] country -- as a 'brothel', common RAW interest can only be to attack Pak," she said, adding "such shameless self-interest of Sharif to preserve looted wealthcountry be damned," he said.

"Nawaz Sharif's meeting with Afghan NSA proves his connections with Pakistan's enemies," claimed state minister Shehryar Afridi. The meeting had proved that the former prime minister was a "tool to be used against Pakistani interests", he said.

Afridi said that Nawaz's statements had already been "used" by India at international forums.Echoing Mazari's words, Faraz said Mohib had called Pakistan a "brothel" in the past, adding that it was a "shame" that the former prime minister was so "insensitive" to the country's self-respect.

Referring to the polls in Pakistan occupied Kashmir that will be held tomorrow, the minister said the region's people would "vote in kind" and reject the PML-N.

Calling the meeting between "fugitive" Nawaz and Mohib "appalling", Minister for Maritime Affairs Ali Haider Zaidi said Nawaz had "violated our stated policy of having no official contact with this despicable fool".

Responding to the criticism, Maryam Nawaz said the foundation of Nawaz's ideology was the peaceful coexistence of Pakistan with its neighbours and he had "worked tirelessly" for it.

"It is the very essence of diplomacy to talk to everyone, listen to their point of view and convey one's own message across: something this government doesn't comprehend and hence is a complete failure on the international front," she said.

Dawn reported that last month, Foreign Minister Shah Mahmood Qureshi had hit out at Mohib for his comments against Pakistan and called on him to "reflect and correct" his behaviour.

"The national security adviser of Afghanistan carefully listen to me ... as the foreign minister of Pakistan I say that no Pakistani will shake your hand or talk with you if you don't desist from the kind of language you are using or the accusations you're making against Pakistan," Qureshi had said. (ANI)