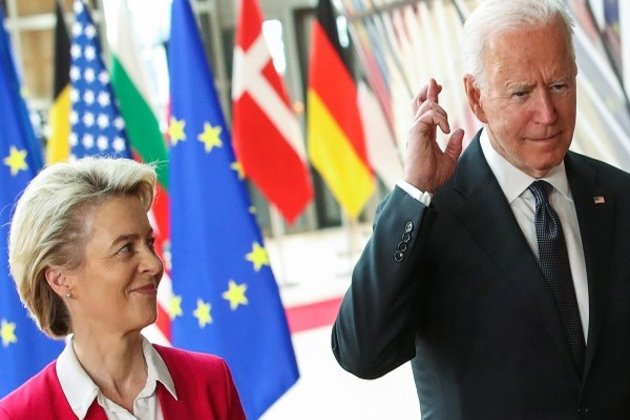 Washington [US], June 15 (ANI): The United States and the European Union (EU) on Tuesday resolved a long-running trade dispute over subsidies to Airbus and Boeing, in a bid to improve transatlantic relations as both sides seek to counter China's rising economic influence.

"Today's announcement that the US and European Union (EU) have reached an agreement in the Boeing-Airbus dispute and agreed to address shared challenges from China does just that," announced the White House in a statement.

As per the deal, the US and EU will suspend tariffs for five years and work together to challenge and counter China's non-market practices in this sector. It also includes collaboration on inward and outbound investment and tech transfer.

The deal will shore up the longer-term competitiveness and innovation of a key sector that is one of the most important sources of middle-class jobs at home.

"Today's agreement represents a model the US can build on for other challenges posed by China. The President routinely says that we are strongest when we work with our friends and allies -- today's announcement is a demonstration of that in action," said the White House.

Both sides will also establish a Working Group to analyze and overcome any disagreements that may arise and ensure that their workers and industries can compete on a level playing field.

Primarily aimed at China's rising ambitions to build a sector upon non-market practices, the US and the EU have resolved to engage in meaningful cooperation on countering investments in the EU and the United States by non-market actors, which can lead to the appropriation of technology and outward investments into China that are influenced by non-market forces.

"The US and EU will work together in specific ways that reflect our high standards, including collaborating on inward and outbound investment and technology transfer. It's a model we can build on for other challenges posed by China's economic model," said President Joe Biden in a statement.

"I've been making the case that the US and Europe--and democracies everywhere--are stronger when we work together to advance our shared values like fair competition and transparency. Today's announcement demonstrates exactly how that can work in practice," he added.

According to CNN, the feud escalated when the Trump administration imposed tariffs on European goods including Parmesan cheese, French wine and Scotch and Irish whiskies. The European Union, in turn, slapped tariffs on US goods such as wine, cheese and suitcases.

The United States and European Union have still to resolve how to tax big tech companies and a dispute over Trump-era tariffs on steel and aluminum.

"The settlement resolves a long-standing trade irritant in the US-Europe relationship. Instead of fighting with one of our closest allies, we are finally coming together against a common threat," said US Trade Representative Katherine Tai.

Earlier, leaders of the Group of Seven (G7) countries on Sunday pledged to promote shared values by calling on China to respect human rights and fundamental freedoms in Xinjiang where Beijing is accused of committing serious human rights abuses against the Uyghur minority, and in the semi-autonomous city of Hong Kong, while agreeing to consult on collective approaches on Beijing's practices to undermine the fair and transparent operation of the global economy. (ANI)