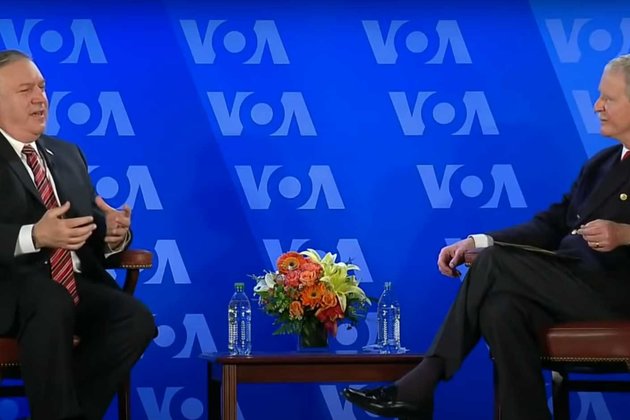 Secretary of State Mike Pompeo on Monday defended the leadership of the U.S. Agency for Global Media against criticisms that its CEO is trying to turn the news network into a propaganda tool.

In a speech delivered at the Washington headquarters of Voice of America, one of the USAGM networks, the outgoing secretary of state said the Trump administration wants to "reorient" VOA with its mission and to "depoliticize what takes place here."

Pompeo is the most senior Trump administration official to speak out in defense of USAGM after Republican and Democratic lawmakers in Congress, media analysts and independent journalists criticized actions taken by Michael Pack, the president's pick to lead the agency.

Pompeo repeated claims by Pack that VOA had failed to address security concerns and had lost track of its mission.

He told the audience that faults should be acknowledged but, "This isn't 'Vice of America' focusing on everything that's wrong with our great nation. It certainly isn't the place to give authoritarian regimes in Beijing and Tehran a platform."

In support of Pack, a former conservative filmmaker, the secretary of state told the audience and those listening to a live feed, "There's a new dawn here at Voice of America."

He also praised the work of the network's journalists for providing independent news to those living in authoritarian countries.

Following the speech, VOA's new director, Robert Reilly, conducted a short conversation with Pompeo about USAGM, its mission and events in the news, but he did not make use of topical news questions provided by journalists beforehand at the network he oversees. Nor did he ask Pompeo about the deadly insurrection at the U.S. Capitol last week that produced shocking images of a symbol of American democracy seen around the globe.

Journalists at the network who attended the event tried to shout questions after it ended but were ignored by Pompeo. The agency said it did not allow outside reporters to attend because of limited space for coronavirus safety protocols.

Since joining USAGM in June, Pack has been criticized for actions including his dismissal of the heads of Radio Free Asia, Radio Free Europe/Radio Liberty; and the Middle East Broadcasting Network; appointing new boards and reassigning the VOA standards editor Steve Springer. VOA's director Amanda Bennett and her deputy Sandy Sugawara stepped down before his arrival.

A U.S. District Court in November barred Pack and his aides from directly interfering in the editorial independence of VOA until a lawsuit alleging violations is settled.

Pompeo echoed remarks made previously by Pack that actions were needed to correct security concerns at the agency and said the chief executive was right to end "rubber stamping J-1 visas for foreign nationals."

In June, USAGM announced a case-by-case review of the special permit for international journalists, resulting in several losing their jobs and the right to remain in the U.S. after Pack failed to renew their requests.

VOA's 47 language services rely on journalists with not only language skills but also the nuanced knowledge of the region they cover. VOA has to prove, when hiring a journalist on a J-1 visas, that no suitable U.S. candidate is available.

U.S. lawmakers and rights organizations including the Reporters Committee for Freedom of the Press have condemned Pack's decision to not renew the J-1 visas, pointing out that it potentially puts foreign journalists at risk of harm if they are forced to return to hostile countries.

In his speech, Pompeo criticized a group of journalists at the news network who said the speech should not be broadcast live.

A letter, sent on behalf of the whistleblowers by the Government Accountability Project, said broadcasting the speech live is a violation of VOA's law, rules and policy.

"A broadcast speech by the outgoing secretary of state on topics on which he has been widely covered should be seen for what it is: the use of VOA to disseminate political propaganda in the waning days of the Trump administration," the letter said.

Pompeo likened the letter to "censorship, wokeness, political correctness" and the cancel culture on social media and at university campuses, where groups call for voices deemed extreme or intolerant to not be given space.

"It all points in one direction - authoritarianism cloaked as moral righteousness," Pompeo said.

David Seide, senior counsel of GAP, disputed Pompeo's view, telling VOA, "This is not about censorship or woke-ism. This is about abiding by the law."

"The accusation that VOA employees were attempting to censor the secretary's speech is ludicrous. The concerns voiced go to the heart of editorial independence," said Seide, who sent the letter to Pack on behalf of a group of protected whistleblowers.

Bruce Brown, executive director of RCFP, shared that view, saying "editorial autonomy should not bend for any one nation's interest, including our own."

Pompeo's speech comes a little over a week before a new administration takes over. During the election campaign, a spokesperson for then-candidate Joe Biden said that if elected Biden would remove Pack from office.